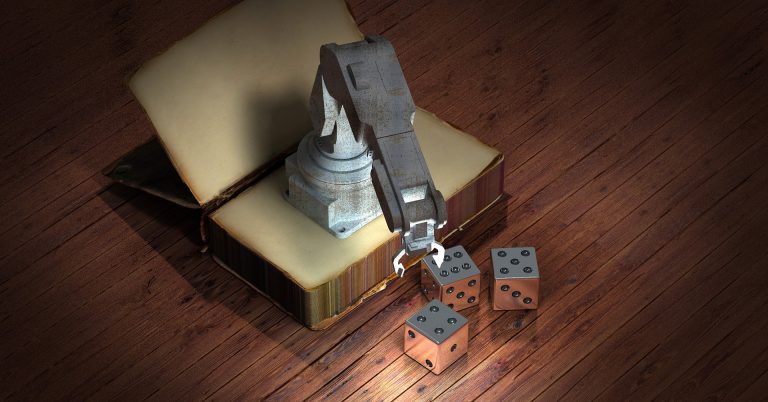 Purposes of the game designers

When creating Sagas Rules, the designers will was to propose as simple as possible rules for the as realist as possible a game experience. Their will was also to avoid manipulating too many types of dices and thus everything in the game is based upon the best known six faces dice. In fact these rules are only one of those proposed by the Magna Regula platform. Many of the scenarios proposed in the  Future Memories or in the Cthulhu Memories universes are using these rules because of their capability to encompass many types of worlds such as Cyberpunk or Heroïc Fantasy.

Some elements of the rules

Rules are available in their English and French versions. Here are presented some elementary principles: on one hand, the way to represent one character and on the other hand the way to solve those questions asked during the game such as “Will I survive?”.

How to throw dice in SagaS?

How to throw dice against skills?

As in many games, Characters have skills. When using them the Game Master has to know if the character succeeded using this skill. This is the reason to throw against your skill.

How to get the rules

SagaS Rules are accessible completely under the Open Game License (OGL, see below). These rules may evolve due to acquired experience or agreed request from the community.

A version of the rules exists with examples and in a near future illustrations. This document Cannot be redistributed or copied without the authors permission.

An extension mechanism exists in order to complete the existing rules due to the specificities of the world you are playing in (you can certainly play using the basic rules in a science fiction world but it will be easier for the Game Master not to search any time he wants something done). As it is only one extension is available (there again french version only) : Psis powers. This extension is available but cannot be redistributed or copied without the authors permission. These rules are in a beta version and will evolve.

The “Open Game Licence” has been written by the Wizard of the Coast company. This License may be characterised thanks to the following principles: